Vigil Season 2 Release Date: What Will Happen in This Series? 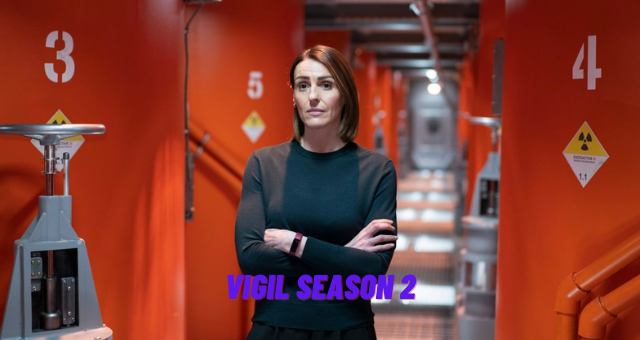 There was little doubt Vigil would make a tremendous impression on our screens even before it torpedoed its way onto our screens.

But it surpassed all expectations and turned into a full-fledged blockbuster, the BBC’s most-watched new drama premiere since Bodyguard in 2018. The series drew an average of 12.6 million viewers over 30 days, with episode one attracting over 13 million people.

World Productions is in charge, and with a resume that includes both Line of Duty and Bodyguard, as well as a slew of other critically acclaimed dramas (Save Me and The Pembrokeshire Murders, to name a few), you can tell these folks know how to keep us hooked to the couch.

So it was only a matter of time until we learned that Vigil season two was in the works.

But, after everything that happened in that tainted submarine, what will happen next? Will Suranne Jones return to action, and if so, how will someone persuade her to do so after she was nearly drowned in action the last time?

Here’s all you need to know about the upcoming second season of Vigil.

When can we expect the second season of Vigil to air?

Thankfully, Vigil was renewed for a second season in March 2022. Now it’s just a matter of finding out when it’ll return to our screens, as details on what’s going on are limited.

We’ll venture a bet that we won’t see it until at least 2023, given that filming hasn’t yet begun.

We’ll update you as soon as we have more information.

Who may be among the cast of Vigil season 2?

Season one of Vigil was, to put it mildly, harsh to members of the crew, with some of them not even making it to the finish alive.

After all, when Martin Compston (who portrayed Craig Burke) is killed off within the first 15 minutes of the series, you know that no one is safe.

Mark Prentice (Adam James), Jade Antoniak (Lauren Lyle), and Jackie Hamilton (Anita Vettesse) all died by the conclusion of the finale, ruling them out of the running.

Suranne Jones’ return as DCI Amy Silva and Rose Leslie’s return as her girlfriend, DS Kirsten Longacre, appear to be a virtual certainty.

Actor Lorne MacFadyen’s character, treacherous petty officer Matthew Doward, was alive and well at the end of the first chapter, but he’s now in the clutches of MI5, so don’t expect him to return.

We have the following for those who were still alive at the end of season one:

There’s also the possibility of meeting some new people.

However, whether we’ll see any of those characters return in season two is dependent on the storyline, which takes us neatly to…

What will happen in Vigil Season 2?

Throughout the first tense season, fans witnessed Amy and her colleagues on land spend weeks hunting for those responsible for the tragedy onboard the nuclear submarine, investigating everything from Russian spies to drug-fueled mishaps to secret transfers.

The harrowing season one conclusion picked off where episode five left off, with Amy stuck within a torpedo tube that was rapidly filling with water after she found that Matthew Doward was the traitor onboard.

Thankfully, she was able to get out of the position by using her torch to scribble a Morse code message on the tube’s walls, alerting Adam James’s Lieutenant Commander Mark Prentice to her whereabouts.

Of course, things don’t always go as planned, as she inadvertently alerted Doward to the fact that he hadn’t yet silenced her. Prentice begged Amy to flee while he battled off the Russian spy after dragging her out of the tube. In the process, he died, completing his redemption arc.

Doward was arrested for his involvement in the plot when Amy exposed him as the covert saboteur who sought to bring the HMS battleship down with the aid of petty officer Tara Kimberly.

Later, after being subjected to a lethal nerve poison in the previous episode, Elliot Glover was shown recovering consciousness, and Amy resumed her romance with an old colleague – and righthand woman throughout the investigation – DS Kirsten Longacre.

So, what does DCI Amy Silva have planned for the future?

The premise for season two is yet unknown, but we do know that the team will return to Scotland to film the series.

The submarine was named Vigil, and Jones’ DCI Silva was sent down following a mysterious murder on board. However, according to journalist Tom Edge, they appear to be relocating from the submersible to a more arid location.

He told RadioTimes.com last year, “We have probably told as many of the stories as we would desire to tell on a submarine.”

“Some of the personas we’ve created as we’ve gone along feel like people we’d like to spend time with. So, if there’s a desire to do it from the rest of the group, I’d gladly participate.”

So the crew may shift gears and focus on someone who was engaged in the program but wasn’t crucial to it, rather than the season one narrative.

Keep checking back here for updates, and we’ll let you know if anything changes.

When can I see the Vigil season 2 trailer?

Unfortunately, because production has yet to begin, there is presently no information on when we could see a trailer. They are, however, often issued in the month preceding the release date, whenever that may be.

But keep an eye on this place because we’ll let you know as soon as we have more information.

Until then, you may re-watch the first season.