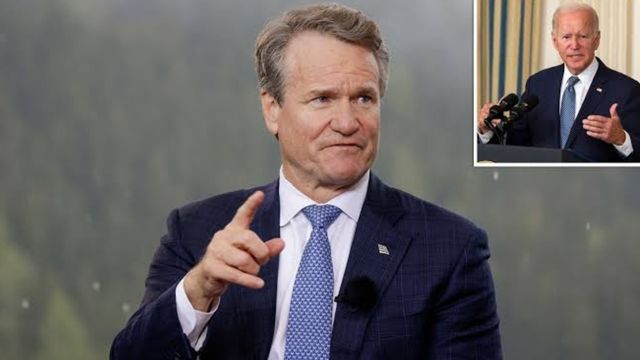 Brian Moynihan, the CEO of Bank of America, criticised the Biden administration for its preoccupation with the question of whether or not the United States is currently experiencing an economic recession.

Moynihan, the head of one of the most important financial organisations in the world, stated that despite the White House’s attempts to play semantic games, the current state of the economy is placing a significant financial strain on individuals.

“The word for this is a recession. It is simply not that important to know whether or not we are now experiencing a recession.

It’s how it must feel for the individuals who are going through this,” said The Associated Press outside the Bank of America Tower in the middle of Manhattan.

Politicians have bickered back and forth on whether or not the US is enduring a recession ahead of the 2022 midterm elections.

On July 28, Vice President Joe Biden stated that the United States was not in a recession, despite new data showing that the GDP had declined for a second consecutive quarter, which fulfils the criteria of a recession that has been widely accepted for a long time

In the meantime, Republican critics have asserted that excessive federal spending is to blame for the worst inflation since 1981, which reached an annual rate of 9.1% in June. This caused a decline in consumer confidence even though monthly job reports were positive.

The Federal Reserve has aggressively increased interest rates as a response to rising inflation, and more rate increases are anticipated shortly after officials discovered “little evidence” late last month that US inflation pressures were easing. This is in response to the fact that inflation has been surging.

Moynihan refused to comment on whether or not the economy of the United States is currently experiencing a recession, stating that this question must be answered by “a bunch of people in Cambridge, Massachusetts.”

He was referring to the National Bureau of Economic Research, which is responsible for determining the official start and end dates of recessions.

Moynihan thinks that the cost of a gallon of gas and the cost of a month’s rent are the two most significant things that have a direct influence on the lives of people currently residing in the United States.

According to data provided by the AAA, national average prices for a gallon of gasoline dropped below $4 for the first time since June, when they hit an all-time high of nearly $5 per gallon.

This comes after prices hit an all-time high in June, when they were nearly $5 per gallon, surpassing any previous record.