After Undergoing Plastic Surgery, Linda Evangelista is Featured Once Again on the Cover of Vogue 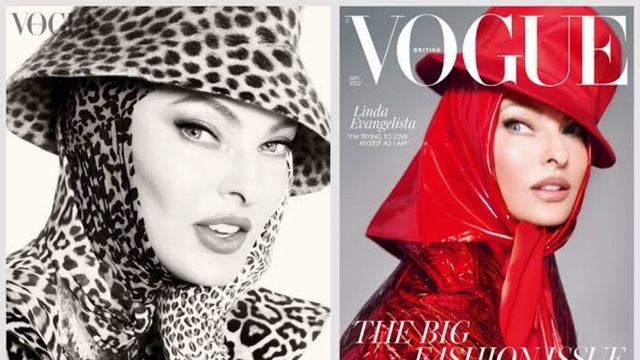 The model Linda Evangelista was featured on the cover of Vogue for the first time since she revealed that she had been “deformed” by a botched cosmetic procedure. Evangelista’s appearance on the cover comes less than a month after she made the revelation.

The complications that occurred as a result of a fat-freezing treatment that “backfired” were concealed in the photographs by the application of tape and elastic to pull back her cheek, jaw, and neck.

She stated that “That is not my jaw and neck in real life, and I can’t walk about with tape and elastics everywhere.”

In an interview with the publication, she stated that she was “trying to appreciate me as I am.”

“Except for the photographs,” she went on to say. “Look, I always assume that we’re here to create dreams for the photos we take. We are giving birth to dreams.

I believe that it may be done. Also, all of my insecurities have been addressed in these photographs, which means that I have been able to focus on doing what I enjoy.

What exactly is “fat freezing,” and what are the potential side effects?

It’s been almost a year since the Canadian supermodel, who was one of the most well-known faces on catwalks and magazine covers in the 1990s and 2000s, announced that she had vanished from the public eye because she had been “brutally disfigured” by the non-surgical fat reduction procedure.

She said that she had disappeared from the spotlight because she had been “brutally disfigured” by the procedure.

She claimed that something went wrong with the CoolSculpting treatment, which is a brand name for cryolipolysis, which is the process of using cold temperatures to reduce fat deposits.

She said that the treatment went wrong because of a rare side effect that increased the number of fat cells rather than decreasing them.

Now, she has shared the following statement with British Vogue: “If I had known side effects may include losing your livelihood and you’ll finish up so sad that you despise yourself… I wouldn’t have taken that chance.”

Every photograph of her that appears in the publication obscures her neck, ears, and hair, revealing only the front of her face.

She claimed that she had been interested in the treatment due to the advertising for it as well as her own vanity.

“Those CoolSculpting advertisements were on all the time, on CNN and on MSNBC, over and over again, and they would question, ‘Do you like what you see in the mirror?'”

“Do you like what you see in the mirror?” They were addressing me directly.

“It was all about the fat that wouldn’t budge from certain places of my body. It stated that there would be no recovery period, no surgery, and… I indulged in the magical elixir, as one might expect from someone as vain as I am. So I decided to give it a shot, and it ended up being a mistake.

She filed a lawsuit against Zeltiq Aesthetics, the business that was responsible for the treatment, and in July she announced that the matter had been resolved.

The following is an excerpt from a statement that Zeltiq issued to Vogue: “We are glad to have settled this problem with Ms Evangelista. The provision of trustworthy, risk-free aesthetic products and services that are supported by scientific evidence continues to be the primary emphasis of our company.

CoolSculpting is a therapy for noticeable fat bulges in nine places of the body that is FDA-cleared and does not involve any surgical procedures.

“I was aware of my value”

Evangelista reminisced on her early days as a model and her meteoric climb to popularity in the 1980s in a different part of the interview with Vogue.

When asked if she was conscious of her beauty and if boys were interested in dating her, her response was “No!” I thought I had a lot of pals, but I didn’t.

You are aware of what it was, right? When I was little, people would often comment to my mother, “Oh, she’s tall. She has the look of a model,’ That, and I had a serious problem with my weight.”

She also addressed the issue of organising a movement to win higher wages for models. She went on to say that her ability to resist was one of her greatest strengths.

“That’s all there was left to it in the end. However, I was also considering businesses from a variety of fields. Not every athlete makes the same amount of money; others earn more due to the unique skills they bring to the field. It wasn’t that I thought I was better than other people… it was just that I knew my worth.