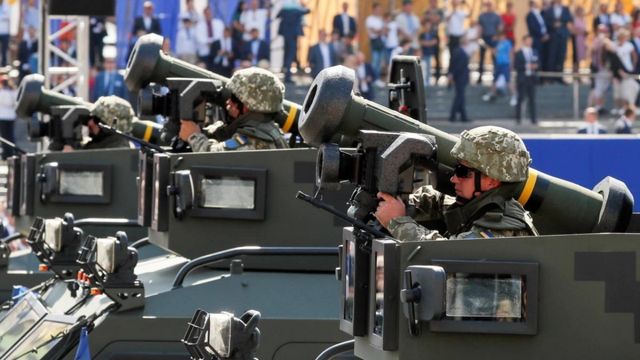 On Friday, the United States made history by announcing for the first time that it will provide Ukraine with Scan Eagle surveillance drones, mine-resistant vehicles, anti-armour rounds, and howitzer weapons to assist Ukrainian forces in regaining territory and mounting a counteroffensive against Russian invaders.

A senior defence official told reporters that a new aid package worth $775 million will include 2,000 anti-armour rounds, 40 mine-resistant, ambush-protected vehicles known as MRAPs with mine-clearing rollers, and 15 Scan Eagles.

These items can assist Ukraine troops in moving forward in the south and east, which are both areas where Russian forces have placed mines. As the battle continues, the official added that the United States is looking into ways to help shape and arm the Ukrainian military of the future.

Antony Blinken, the Secretary of State, was quoted as saying in a statement that “These capabilities have been carefully tailored to make the maximum difference on the battlefield and bolster Ukraine’s position at the negotiating table.”

On Friday, the President of Ukraine, Volodymyr Zelenskyy, expressed his gratitude for the shipment through a tweet, writing, “We have taken another significant step to overcome the invader.”

The most recent assistance comes at a time when Russia’s invasion of Ukraine will soon have lasted for six months.

Since the beginning of the Biden administration, the total amount of military assistance provided by the United States to Ukraine has been around $10.6 billion. Since August 2021, this is the 19th time that the Pentagon has sent supplies from the Defense Department’s stockpiles to Ukraine.

In the past, the United States has supplied ammunition for howitzers; however, this is the first time that it will supply 16 of the weapon systems themselves.

In addition, the assistance package consists of 1,000 javelin missiles, 1,500 anti-tank missiles, and an unspecified number of high-speed, anti-radiation, or HARM, missiles that are designed to target radar systems. To withstand the onslaught of Russian forces and reclaim the land that Moscow has taken, Ukrainian forces have been utilizing a variety of precision artillery weapons with a high degree of effectiveness.

According to the guidelines established by the Defense Department, the official from the Department of Defense briefed the media on the new weaponry assistance while on the condition that they maintain their anonymity.

Although Russian forces have made some incremental gains in the east, they have also been pushed on the defensive in other places as a result of Ukraine’s intensifying attacks in Crimea, which is located on Ukraine’s peninsula on the Black Sea.

In 2014, Moscow took control of the land that is currently held by Russia. It was reported last week that nine Russian jets had been destroyed at an airbase in Crimea in attacks that revealed the capability of the Ukrainians to strike far behind enemy lines.

Attacking facilities in Crimea, as Russian commanders have warned, constitutes an escalation in the confrontation that is being fanned by the United States and NATO partners and threatens to drive the United States farther into the fight.

On Friday, a Western diplomat stated that the battle is “almost operationally halt,” meaning that neither side can launch large offensives against the other.

The officer, who requested anonymity to discuss military assessments, stated that the overall pace of the campaign has slowed down, in part because both sides know that “this is a marathon, not a sprint and that expenditure rates and preserving their munitions are vital.”

However, officials from both the United States and Western nations have stated that Ukraine has been able to launch successful attacks deep behind Russian battle lines. These attacks are destroying the logistical support, command and control, and morale of Moscow’s forces and are hurting their morale.

The official from the United States stated that even while Ukrainian forces have not been successful in retaking a large portion of territory, they have been successful in considerably weakening Russian positions in several locations across the country.

The efforts to bring an end to the violence have also carried on. On Thursday, the head of Turkey and the head of the United Nations met with the president of Ukraine, Volodymyr Zelenskyy, in western Ukraine.

They talked about a variety of topics, such as exchanging prisoners and attempting to convince United Nations atomic energy experts to visit the Zaporizhzhia nuclear power plant, which is located in southern Ukraine.

The complex has been the target of numerous explosions since immediately after the invasion began on February 24 and has been under the control of Russian forces ever since.

Both Kyiv and Moscow are pointing the finger at the other for bombarding the facility, which is fueling international concerns of a catastrophe on the continent.

Given the circumstances, Turkish President Recep Tayyip Erdogan stated that he would follow up with Russian President Vladimir Putin.

that the Kremlin’s blessing would be required for the majority of the issues that were brought up.