Cardi B Dismisses the Reports That Offset Has Been Cheating On Her With Saweetie: ‘You Lying’ 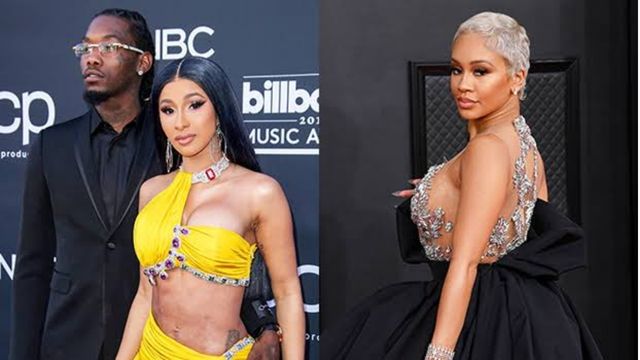 On August 24, Cardi B, who is 29 years old, defended her husband Offset,

who is 30 years old, against a series of abusive messages.

A fan on Twitter bashed Cardi repeatedly and suggested that her husband had been cheating on her for the past five years with another rapper named Saweetie,

who was formerly dating another member of the Migos named Quavo.

Cardi B’s answer to the troll, in which she refuted the allegations that Offset had been unfaithful, was “No baby, you lying.”

“You making insane lies by beginning s**t and adding female rappers in it WITH NO RECEIPTS,

no blog ever commented about this all of a sudden you get out of jail 5 days ago, and you make up for lied in 2 hours WITH NO RECEIPTS!”

In his attacks on Cardi, the Twitter troll brought up Offset’s history of drug offences as well as charges related to possessing weapons.

Once more, the rapper known for the song “I Like It” did not hold back and defended her man.

“Oouu rather sling d*cks than take p*ssy from b**ches…. you’re bringing up my ni**a in an attempt to get me angry…

rather sling d*cks than take p*ssy from b**ches… LETS NOT TALK ABOUT HUSBANDS NOW,” Cardi remarked.

There were even more abusive tweets hurled at Cardi, but she never gave in to her critics or deleted any of her responses.

Offset did not make any comments on the controversy, and it appears that he did not feel the need to do so because his wife appeared to have things under control on her own.

Cardi’s supporters came out in force to show their support for her, even going so far as to make her comment that “let’s not speak about the husbands” trended on Twitter.

Cardi made it clear that she did not want her husband to have a romantic relationship with Saweetie, but Offset has a history of cheating on Cardi when they were together.

In point of fact, Cardi went ahead and filed for divorce in September 2020, shortly after she discovered that Offset had cheated on her for a second time.

December 2018 marked the beginning of the first case of cheating. Despite this, Cardi chose to forgive her husband both times,

and she then submitted an amended petition for divorce in order to rescind her previous petition.

She discussed the cheating scandal in an interview that appeared on the cover of the December 2019 issue of Vogue and said that “a lot of people were very upset at me” for her decision to make the decision.

During the interview, Cardi also stated, “I believe in forgiving. I contemplated it in prayer.

Cardi B and Offset have appeared to be happier than they have ever been after the most recent cheating scandal.

They are the proud parents of a daughter named Kulture, who is four years old, and a son named Wave, who is 11 months old.

Both Cardi and Offset are dedicated to their professional lives, which allows them to be wonderful parents to their children and wonderful partners to one another.