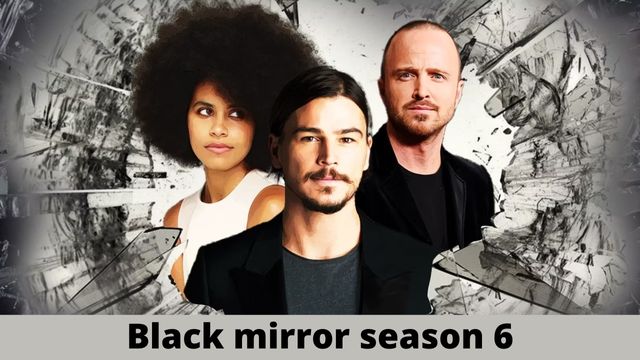 It is a sci-fi drama series that focuses on the escalation and paranoia that comes along with every game-changing breakthrough. Black Mirror is a dark sci-fi show that takes a vivid look at the evil side of technology in an eerily lifelike manner.

The series on Netflix presents numerous terrifying scenarios depicting what the world may look like in the not-too-distant future, prompting viewers to reevaluate their perspectives on a variety of topics, including their use of social media and their mobile devices. Fans from all around the world have been wondering when the sixth season of Black Mirror will be released after the show’s first five seasons were so carefully designed and after it debuted an outstanding interactive element.

After the announcement that the show was in the process of being developed, an announcement regarding casting was made in July of 2022. In August of 2022, Variety published an article announcing numerous new cast members.

Even though Aaron Paul has appeared on the program before, it was not made clear at the conclusion of the Star Trek–inspired episode USS Callister whether he will be playing the same role or someone completely different in future episodes.

The specifics of the storyline for the sixth season have not been revealed as of yet. Due to the fact that it is an anthology series, each episode will most likely contain a different tale, but they will all adhere to the show’s overarching plot, which can be found described as follows on IMDb.

“Set in a world only minutes from our own, ‘Black Mirror,’ a UK and USA non-hosted anthology series, unveils how modern technologies can backfire and be used against their makers. Each episode of the series is set in a slightly different reality with different characters battling different types of technologies.

A new development concerning the program is that the next sixth season will have at least three additional episodes in comparison to the previous fifth season. It will also reportedly have a greater cinematic scope, with each episode being treated as a standalone film in the way that it is produced.

Since production on Season 6 has not yet commenced, there will not be any sneak peeks available any time soon. There is a possibility that fans won’t even get a sneak peek at the new season until 2023.

For now, you can watch the previous season’s trailer

There has been no indication as to when Season 6 will become available on Netflix, but we can assume that it won’t be anytime soon. The claim from Variety that Season 6 would have more episodes than Season 5 did and that they will be “more epic in scope” adds to the possibility that the premiere date could be pushed back.

Due to the fact that there were only three episodes in Season 5, it is still unknown whether or not Season 6 will simply add a fourth episode or will increase the total number of episodes to six, as was the case in Seasons 3 and 4.

Read more: Legacy Season 5 Release Date: Will This Season Be Picked Up by Netflix?

Given all of that information, fans shouldn’t anticipate that Season 6 will be published at any point in 2022; instead, they should keep their fingers crossed that the new episodes will become available on Netflix sometime in 2023.

Which Episode of Black Mirrors Do You Think is the Best?

San Junipero, the fourth episode of Season 3 of Black Mirror, takes place in a seaside town with the same name as the episode. At a nightclub called Tucker’s in 1987, a young woman by the name of Yorkie, played by the phenomenal Mackenzie Davis, strikes up a conversation with an outgoing party girl named Kelly, played by the endearing Gugu Mbatha-Raw.

Why Did They Decide to Cease Filming Black Mirror Episodes?

By July 2020, Netflix had established a long-term arrangement with the Broke and Bones company for series and other production rights; nevertheless, Endemol continued to hold the rights to the Black Mirror series. It was reported by Variety that as a result of this, Brooker and Jones were unable to produce any future series until fresh contracts were drafted.

Are There Any Ties That Connect Black Mirror Episodes?

Each episode of the dystopian television series Black Mirror created by Charlie Brooker is a part of an enormous multiverse that connects each episode with overt and covert references from previous or future seasons. Bandersnatch, the feature-length picture, has the potential to share hundreds of connections with all twenty-two episodes of the show (2018).

Black Mirror is a dark sci-fi show that takes a vivid look at the evil side of technology. The sixth season will have at least three additional episodes in comparison to the previous fifth season. It will also reportedly have a greater cinematic scope, with each episode being treated as a standalone film.

Production has not yet commenced on Season 6 of Black Mirror. There is a possibility that fans won’t even get a sneak peek until 2023. The premiere date could also be pushed back to 2023 due to a lack of episodes.