Super Pets Release Date: Who Is This Mysterious Lulu In This Movie? 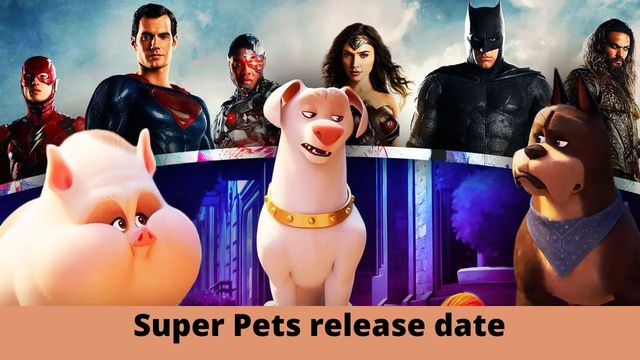 However, with a slew of highly anticipated films on the way, and with the continuous efforts to establish the DC Extended Universe, there is a lot to look forward to – with one particular project being the DC League of Super-Pets.

DC is best known for its dark nature in comparison to its competitor, Marvel. Fans are quite excited about a variety of upcoming DC projects, but the cinematic adaptation of DC’s League of Super-Pets does not rank particularly high on that list.

However, it seems that with each new detail that is uncovered, this optimistic movie is getting closer and closer to securing a place in the heart of the audience, since it caters to people of all ages.

DC League of Super-Pets is a new 3D-animated movie that chronicles the stories and exploits of an all-animal squad led by Krypto the Superdog and Ace the Bat-Hound. The film is based on DC’s original Legion of Super-Pets and was created by Warner Bros.

Animation. With the exception of Krypto, who has been featured in comic books and other forms of media on a consistent basis and even had his own short-lived television series, the Legion has never managed to break through into the mainstream media.

Warner Bros. is hoping things will change after they release this movie. We are introduced to new characters with equally extraordinary powers who are eager to save humanity and win people over, but the classic DC super pets do not make an appearance in this story. So, in order to catch you up, here is everything that you need to know about this charming and captivating film.

Similar to his best friend Superman, the superhero dog Krypto was born on the fictional planet Krypton. The two individuals are inseparable; whether they are hanging out or battling criminals, they do everything together. Therefore, whenever there is a threat to Superman, Krypto intends to organize a rescue operation, but he will require some assistance.

To our great relief, some of the animals rescued from the shelter develop incredible superpowers. PB, the pig, has the ability to grow to any size, Ace, the dog, develops super strength, Merton, the turtle, becomes a speedster, and Chip, the squirrel, learns to harness electric powers.

They become a formidable group when they work together, but will they be able to cooperate effectively enough to save the Justice League?

The movie has a lot of humor that adults will enjoy, despite the fact that it is aimed at a younger demographic target audience. In point of fact, based solely on the appearance of the movie’s trailer, it appears to be the kind of film that parents will enjoy watching alongside their children, particularly if the parents are fans of DC Comics.

The plot of DC League of Super-Pets is effectively introduced in the promotional material for the film, without giving away an excessive amount of information about the content of the film itself.

There are a lot of jokes and funny moments in it; it’s a very safe bet that if you enjoy the teaser, you’re going to like the movie as well. In addition, there is a trailer that focuses on Batman and Ace’s unique relationship with each other.

They are accustomed to working independently; however, it appears that they may have more in common with one another than they had originally believed. The trailer for Batman is a work of pure magic, and it features Danny Elfman’s classic score from the 1989 film Batman.

On July 29, the DC League of Super-Pets was released in theatres across the United States and the United Kingdom. The film’s release came at the ideal moment in the middle of the summer, when kids are seeking things to do and parents are looking for methods to keep youngsters amused.

The animated series DC League of Super-Pets is scheduled to premiere on HBO Max in the United States on September 12.

Will We Be Able to Watch Super Pets on Disney Plus?

DC League of Super-Pets is not available on Disney+ as of the time of this writing. The majority of content on Disney+ consists of the company’s own animated films as well as other works that are Disney-owned and distributed. Those who are interested in using the streaming platform will need to pay $7.99 per month as of right now.

How Long Does the Dc Super Pets Episode Last?

Who is This Mysterious Lulu Super Pets?

The animated feature film DC League of Super-Pets, which will be released by Warner Bros. in 2022, has Lulu as the primary enemy. She was a bald guinea pig for Luthor’s experiments, and as a result, she had exceptional intelligence. A fragment of a krytron crystal was the vehicle via which her psychic abilities were activated.

DC League of Super-Pets is a new 3D-animated movie that chronicles the stories and exploits of an all-animal squad led by Krypto the Superdog and Ace the Bat-Hound. “The Rock” voices Krypto, Superman’s Kryptonian Labrador. John Krasinski voices Superman in the film.

The plot of DC League of Super-Pets is effectively introduced in the trailer. Some of the animals rescued from an animal shelter develop incredible superpowers.

The movie has a lot of humor that adults will enjoy, despite the fact that it is aimed at a younger demographic than its target audience. On July 29, DC League of Super Pets was released in theatres across the U.S. The animated series is scheduled to premiere on HBO Max in the United States on September 12. The DVD and Blu-ray releases are scheduled for the 10th of October.