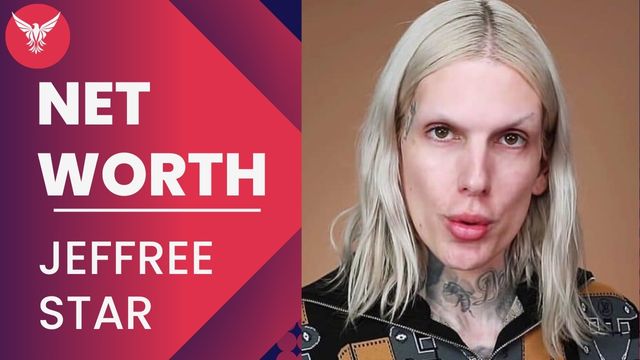 Jeffree Star is a YouTuber, cosmetic artist, and former singer-songwriter from America. He is the founder and owner of Jeffree Star Cosmetics.  In 2009, Star released an album titled Beauty Killer, which includes the song “Lollipop Luxury” with Nicki Minaj. To promote his songs, he undertook many global tours. Let’s know the net worth of Jeffree Star.

Jeffree Lynn Steininger Jr. was born on November 15, 1985, in Los Angeles County, California, and grew up in Orange County, California. He claims that he began experimenting with his mother’s cosmetics as a youngster and persuaded her to allow him to wear them to school in junior high.

Star graduated in 2002 from Pacifica High School in Garden Grove, California. After graduating from high school, he officially changed his name to Jeffree Star and moved to Los Angeles, where he supported himself with cosmetics, modeling, and music gigs.

He describes his early years when he used a fake ID to enter Hollywood nightclubs, where he was hired as a personal makeup artist by celebrities. Over time, he began to network with celebrities due to his makeup expertise. He also gained a following on social media, particularly on MySpace, where he offered cosmetics advice and music.

With photo updates garnering tens of thousands of comments, he eventually amassed one of the largest early MySpace fan bases. In 2006, he had the most linked profile on MySpace. He also rose to prominence as one of MySpace’s most popular unsigned musicians. His tracks also consistently topped the Independent Artists lists on MySpace Music.

From around 2015 to January 2020, Nathan Schwandt was Star’s boyfriend. Star professes to refrain from alcohol while having tweeted many times about drinking vodka. He also states that he avoids cigarettes and heavy drugs, but smokes cannabis (which is legal in California).

Star’s current residence as of December 2020 is in Casper, Wyoming. Star and his companion were both injured following an automobile accident in Wyoming on April 16, 2021. He had a broken back and many fractures to his spine.

What Is Jeffree Star Net Worth?

According to Caknowledge, Jeffree Star is a YouTuber, entrepreneur, cosmetic artist, and former singer-songwriter with a $210 million net worth. He is an icon in the fashion industry as well as in the lifestyle industry. He is both a fashion and beauty expert.

In addition to being one of the highest-paid YouTube stars in the world, he earns the majority of his current riches from his cosmetics company, Jeffree Star Cosmetics. His vivid pink hair and various tattoos have made him famous.

Jeffree Star: Success Get From Career

Jeffree stated in a 2018 interview with YouTuber Shane Dawson that his cosmetics empire’s yearly total income exceeds $100 million. Since the company is private, this could not be confirmed, but based on Jeffree’s mansion and car collection, which we see in a different Shane interview, the company is obviously doing quite well!

Jeffree Star currently has investments in marijuana, real estate, and merchandise. He owns the shipping and fulfillment facility utilized by Jeffree Star Cosmetics and other drop-shipping businesses. Jeffree and Shane launched a range of eyeshadow and liquid lipsticks in 2019.

Jeffree said in an October 2019 YouTube video that they would make $35 million if the eyeshadow sold out, with Shane receiving $10 million. With repeated orders, the quantity would eventually increase even further. Jeffree made $18 million from his many business activities between January 1 and December 1 of 2018.

Star established his e-commerce beauty company, Jeffree Star Cosmetics, in 2014. In a five-part docuseries by Shane Dawson, Star said that the termination of his singing career had left him almost bankrupt and that he had spent his last resources to launch his cosmetics line. As of October 2020, Star’s YouTube channel has 17.4 million followers and over 2.4 billion views.

The magazine Bustle referred to Star as “a musician and former MySpace celebrity who remade himself in the YouTube cosmetics lesson realm”. His initial line of cosmetics was velour liquid lipsticks, which were followed by highlighter palettes, lip scrubs, eyeshadow palettes, clothes, and accessories like mirrors and make-up bags.

On August 11, 2018, a Morphe Cosmetics store in Paramus, New Jersey’s Westfield Garden State Plaza became the first site on the East Coast to offer the cosmetics range. Star has subsequently introduced other popular collections, including the “Blue Blood” eyeshadow pallet.

Jeffree Star Cosmetics’ association with Morphe ended in July 2020. The separation occurred after numerous other beauty influencers severed relations with Morphe, with some explicitly and others tacitly suggesting that they did so in reaction to racist claims made against Star.

Regarding Jeffree Star, there is no doubt that he is virtually swimming in cash! The beauty magnate has become one of the wealthiest internet personas to date, and as a result, has amassed an impressive collection of cars.

How is Jeffree So Rich?

According to Celebrity Net Worth, Star earns over $200 million every year with his YouTube channel, a cosmetics company, other items, and investments. After taxes and other expenses are deducted, Star earns around $75 million USD.

How Does Jeffree Star Afford Everything?

Jeffree claims to own around ten small enterprises, one of which is a marijuana line. In 2018, he stated, “I hold investment properties across the world and invest in the marijuana industry.” “I own a shipment and fulfillment center, a retail business, and I print and create everything myself.

Is Jeffree Still With Nate?

Over a year has passed when Jeffree Star revealed on YouTube to 33 million viewers that he was breaking up with his 5-year partner Nathan Schwandt.