One Punch Man Season 3 Is It Coming To This Year In Crunchyroll? 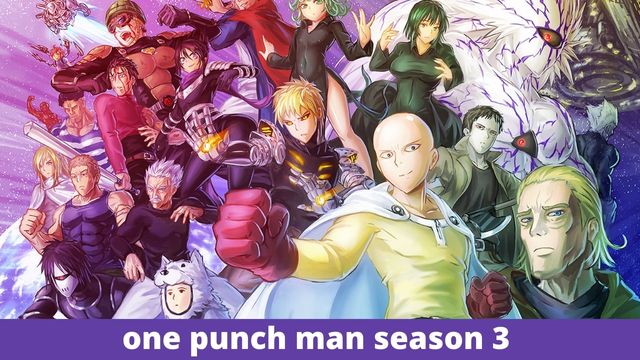 When will the third season of One-Punch Man be available? It has been a few years since we last saw Saitama save the day in the anime series by dispatching a monster with his signature single right hook, thereby averting disaster once more. The Elder Centipede had no idea what had just happened to it, which left all of us wondering what will come next.

That is an excellent question because One-Punch Man has continued to develop and advance around the extraordinary abilities of its namesake protagonist throughout its entirety. When are we going to see a villain who is able to withstand more than one of Saitama’s blows?

The power that Genos possesses is only increasing over time. Would he ever have the ability to betray his master? So many questions!

One-Punch Man, an animated series that was one of the most successful shows to air in the 2010s and was based on a manga by Yusuke Murata, Up to this point, there have been two seasons worth of incredible threats to the planet Earth, both of which have been resolved by Saitama using an intense knuckle sandwich, with some interpersonal conflict thrown in for good measure.

Is there going to be another one soon? If there is, at what time will you be able to view it? You have arrived at the right location because we have compiled all of the information you require regarding One-Punch Man season 3 here for your convenience.

On August 18, 2022, it was officially announced that One-Punch Man would be getting a third season, but a release date has not yet been disclosed. There have been a few rumors circulating that One-Punch Man season 3 could possibly be released in the year 2023, but you should take these rumors with a grain of salt.

The global Covid-19 pandemic has caused some shifts in production schedules, but also, some of the central creative forces are now busy with other work, so that’s another reason why it’s taken so long for a third season to be announced.

Shingo Natsume, who directed the first two seasons of the show, is currently working on Yojohan Time Machine Blues, which is another series. At the very least, we will have to wait until he can once again devote his time and energy to Saitama and company.

Along the same lines, there is also the question of which production company will make it. Between seasons one and two, animation was handled by the venerable Madhouse and then by the less well-known JC Staff.

This change resulted in a noticeable decline in the show’s overall quality, and it is currently unknown whether or not JC Staff will continue to be responsible for the show’s animation or whether another team will be brought in.

The plot of “One Punch Man” is propelled forward by Saitama, a hero who hails from the fictitious city of City Z and whose adventures are the focus of the series. Because he could knock out his adversaries with a single blow from his fist.

The one-punch game has become too difficult for him, so he is looking for something that is more difficult and that he feels he deserves. All of his other feelings are overshadowed by boredom, and he has a strong sense that he is confined.

Throughout the course of One Punch Man, two groups are pitted against one another: The Hero Association and The Monster Association. Both of these groups are involved in a number of fights, rescues, and situations in which they must survive.

Saitama, who had not been a member of the Hero Association in the past, was subsequently accepted into the lowest levels of that organization. This action-adventure film features some excellent fight sequences as well as comedic and emotional pauses throughout its running time.

In the upcoming season of One Punch Man, viewers can probably anticipate seeing a great deal more of Saitama and his protege Genos. Because the program features a rotating cast of good guys and bad guys, it can be difficult to keep track of everyone in the cast at once.

Read more: Everything Everywhere All at Once Release Date: How Much Money They Spent on This Movie?

The Atomic Samurai, the Child Emperor, the Metal Knight, and the Zombieman are just some of the heroes who can be found in the higher echelons of the organization; however, there are a great many more.

Following Saitama’s intervention, a great number of monsters have already passed away, in addition to those that have been mentioned above.

Even a teaser for One-Punch Man season 3 has not been released, let alone a full trailer for the upcoming episode. Given how little we actually know, it is impossible to make any kind of educated guess about when we might get a clip because we just don’t know enough.

Having said that, we haven’t been completely deprived of action involving Saitama. Yusuke Murata, the manga artist who created the original work, published a short that he had written, drawn, and animated all by himself in September 2019. Even though it’s not very much, at least it’s something!

How Many Episodes Will There Be in the Third Season of OPM?

It is anticipated that there will be a total of 24 episodes in One Punch Man season 3. There have been more than 170 chapters published in the One Piece manga series.

Because the first two seasons of the OPM anime were only adapted up to chapter 84 of the manga, we can safely say that there is the sufficient source material for an anime season consisting of 24 episodes.

Who Is It That Can Beat Saitama?

In the well-known anime series Bleach, one of the most important bad guys is named Baraggan Louisenbairn. Because of his immense spiritual powers, he is an Arrancar in Aizen’s army, and he is more than capable of vanquishing Saitama.

Senescencia is his most dangerous ability that he can use against Saitama because it allows him to slow down time in the area around him.

Who is the Antagonist of the Third Season of One-punch Man?

Garou, whose name means “monster” in Japanese, is a significant foe in the One-Punch Man series. He is also the main antagonist of the Human Monster Saga, which bears his name. It used to be that he was a disciple of Bang and his top student, but later on, he was expelled from his dojo for brutally assaulting many of the other students.

One-Punch Man was one of the most successful shows to air in the 2010s. Saitama has averted multiple threats to the planet using his signature right hook. The plot of “One Punch Man” is propelled forward by Saitama, a hero who hails from the fictitious city of City Z.

This action-adventure film features some excellent fight sequences as well as comedic and emotional pauses. It’s unknown whether or not JC Staff will continue to be responsible for the show’s animation. Even a teaser for One-Punch Man season 3 has not been released, let alone a full trailer for the upcoming episode.

Yusuke Murata, the manga artist who created the original work, published a short that he had written, drawn, and animated all by himself in September 2019.