Strange World: What Is The Inspiration Behind This Film? 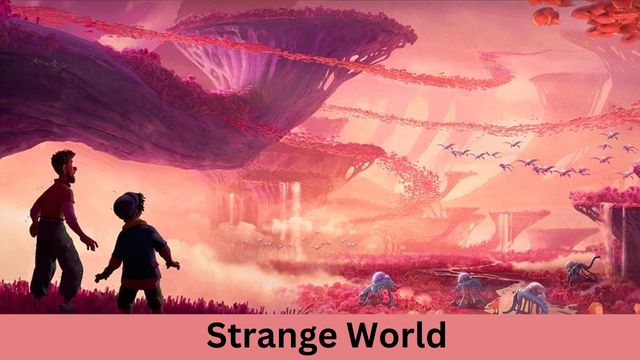 It would appear that Walt Disney Animation Studios is preparing yet another treat for its audience, and this time it will be in the form of a mystical, whimsical, and unconventional Strange World. Having had a phenomenal year in 2021, with many notable releases, one of which, Encanto, won an Oscar, the company is riding high.

In keeping with Disney’s long-standing practice of maintaining a strict policy of secrecy regarding all of its projects, very few specifics regarding the movie have been revealed.

However, the information that has been disclosed regarding members of the cast and the creative team behind the project indicates that the movie will most likely go on to become a hit among viewers, similar to many of Disney’s other projects that have been produced in the past. On June 6, 2022,

Disney released an official teaser trailer for the upcoming film Strange World. The trailer was met with a lot of positive responses, and there was a decent amount of excitement among the fans. The initial reaction to Disney’s first look poster, which was published in December 2021, was roughly the same.

The comments on the YouTube page for Walt Disney Animation Studios reveal that fans are extremely excited about the release of the movie and are very taken up with the stunning graphics and unusual creatures that are depicted in the film.

A great number of people praised the efforts of the animators and praised them for creating a world that appeared to be so magically realistic.

Disney will reveal the title of its upcoming animated feature film that will be released in theatres in December 2021.

The company announced that production on Strange World had begun and shared some stills from the animated series on Instagram in order to give fans a sneak peek at what they can expect.

They captioned the post that they made on Thursday, December 9 with the following: “FIRST LOOK Strange World ventures deep into an uncharted and perilous land where fantastical creatures wait.”

“I loved reading the old issues of pulps when I was a kid,” is what film director Don Hall had to say about the source material for the movie.

He stated to Variety that: “They were epic journeys in which a band of intrepid explorers would attempt to uncover a mysterious world inhabited by legendary beasts. They have served as a significant source of motivation for Strange World.”

On June 6, 2022, Disney released a teaser trailer for the upcoming film Strange World.

In the latter part of the year, moviegoers can anticipate seeing the film in theatres on November 23 of this year.

The release of Strange World will take place over the Thanksgiving weekend when it will go up against films like The Fabelmans, directed by Steven Spielberg, and Creed III, starring Michael B. Jordan. Both of these films are expected to do well.

The protagonist of Strange World is a member of the Clade family known as the Searcher Clade. This Clade family is renowned for their illustrious adventures, which have established them as the greatest explorers in history.

Read more: Chainsaw Man Anime Release Date: Does It Include Any Romantic Elements?

Searcher, on the other hand, does not appear to have any interest in following in his family’s footsteps as adventurers. Instead, he expresses a desire to lead a peaceful life as a farmer rather than the incredibly loud, unpredictable, and potentially dangerous life of an adventurer.

When Searcher and his family happen upon a world that defies explanation and practically refuses to follow the basic established laws of nature, all of that could very well change for him. In terms of how they react to conflict and peril, Searcher and the other members of his family couldn’t be more different from one another.

However, if they want to put this arbitrary family drama behind them and find out what this brand-new frontier has to offer, they will need to put their differences aside.

Jake Gyllenhaal, who played Spider-Man in Spider-Man: Far From Home, will lend his voice to the protagonist Searcher Clade. Gyllenhaal’s illustrious acting range will undoubtedly lend depth to our main hero.

It has also been established that Alan Tudyk will play a part in the movie. This means that he will keep up his streak of appearing in every Walt Disney Animation movie, which began with Wreck-It Ralph.

Read more: Ginny and Georgia Season 2 Release Date: What Was Ginny Carrying In Her Bag?

The technical ability that is being demonstrated here is without a doubt impressive (which should come as no surprise to anyone), but in terms of design and art style, it appears to be on an entirely different level.

This is already without a doubt one of the most visually distinctive projects that Disney Animation has undertaken in a very, very long time. This can be attributed to everything from the unusual color palette to the bizarre creature design.

What is the Inspiration Behind Strange World?

It is anticipated that it will be made available to the public on November 23, 2022, and it will be the 61st animated feature film to be included in the Disney Animated Canon. It takes inspiration from the novel Strange World, which was published in 1964.

Where Can I Find Stranger Things to Watch?

A travel show called Strange World is currently available to stream online. You can watch it on your Roku device by using Spectrum TV.

Production has begun on Strange World. The movie will be released in December 2021. Fans are very taken with the graphics and creatures that are depicted in the film. It is expected to be a hit like many of Disney’s other animated features. On June 6, 2022, Disney released a teaser trailer for the upcoming film Strange World.

Moviegoers can anticipate seeing the film in theatres on November 23 of this year. Walt Disney Animation Studios is currently working on its upcoming animated adventure film in the United States called Strange World.

The film was formerly known as Searcher Clade. It is anticipated that it will be made available to the public on November 23, 2022, and will be the 61st animated feature film included in the Disney Animated Canon.