After months of market turmoil, European companies are looking to sell bonds once more as investors start to favor riskier debt, providing the last chance to raise money before the year is over.

However, there are hesitant indications that supply and investor interest are increasing, particularly as signs that inflation may be peaking provide some stability to choppy markets.

Giulio Baratta, head of investment grade finance at Debt Capital Markets, EMEA at BNP Paribas, said, “If we concentrate on the past couple of weeks, now this is a good entry point.” For instance, Vonovia offered a respectable yield, and the fact that it is a leading player made it clear that the deal would be successful in the real estate industry.

The Vonovia sale had roughly a six-fold increase in demand.

The first hybrid bond offering of its kind in Europe in two months was made by the Spanish telecom company Telefonica, raising 750 million euros. 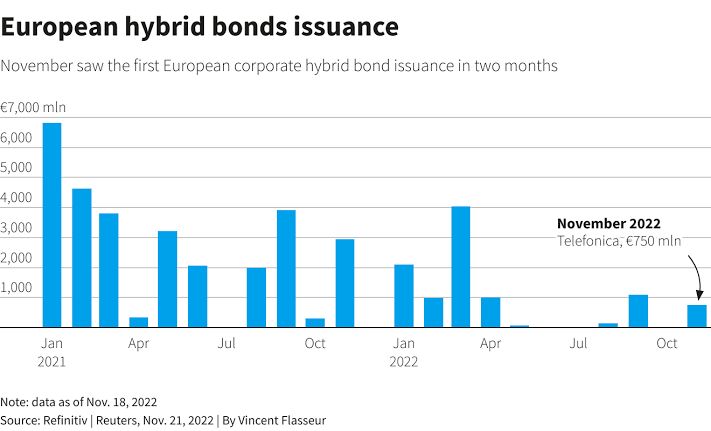 Particularly suffering are hybrid bonds, which combine debt and equity features. These bonds are generally thought to be riskier to hold than standard corporate investment grade bonds.

Companies typically used the called date on a hybrid bond to refinance debt at extremely low borrowing rates during the ultra-low rate environment of the previous decade.

But as rates climb sharply and quickly to control inflation, that choice has become less enticing. The Federal Reserve is currently implementing the fastest tightening of U.S. monetary policy in the last 40 years, while the European Central Bank has increased rates by 200 basis points since July.