Temptation Island Season 4 Release Date: Who Are the New Couples? 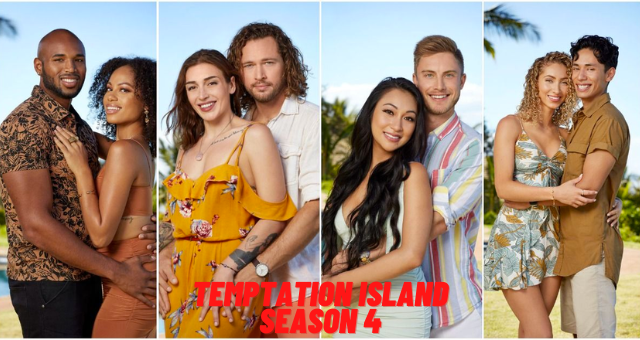 The plot revolves around a circumstance in which certain couples choose to live with a group of people of the opposite sex to test their relationships.

In previous seasons, many couples cheated on one other, but some strong ones stayed together. And now the program is coming back shortly, and everyone is excited to see what will happen and what havoc will be wreaked.

Let’s take a look at the next season in-depth, as well as some important developments.

When will the fourth season of Temptation Island be released?

The couples feel they have nothing to be concerned about, but believe me when I say they do. Season 4 of Temptation Island will premiere on March 16, 2022, at 10 p.m. ET/PT.

Where Can I Watch Season 4 of ‘Temptation Island’?

Even if you’re not single, you’re ready to mingle!

You don’t have to be concerned about where you’ll be able to catch up on the future season. This season of Temptation Island will air on USA Network, a streaming network.

These couples must decide whether they want to spend the rest of their lives together or fall into the attraction of the singles looking for ‘the one.’

They’re joined by 24 stunning single men and women on the lookout for long-term love.

The Episodes of Temptation Island Season 4

The first episode of the next season is titled “Don’t Tempt Me.” Four new couples come to Temptation Island in this debut episode to see if their relationships are intended to be.

The title of the second episode of the forthcoming season is “Out of Sight, Out of Mind.” In the second episode, the singles arrive, and things start to get out of hand; the first bonfire results in some dreadful wake-up calls.

The following is a list of the four couples that will appear in the forthcoming season to put their faith to the test.

Ashley and Lascelles are a couple.

The pair believes that they are a great couple that can overcome any obstacle. The pair have been together for seven long and wonderful years, and this season will put all of those years to the test.

SO ready to party it up with @baddieeash & Lascelles on the #TemptationIsland season premiere March 16 on @USA_Network. 💃 🏝 pic.twitter.com/uGrp0Ws4rx

Lascelles slipped through Ashley’s direct message on Instagram. The pair discussed their first meeting. And their love is undeniable.

Iris and Luke are a couple.

This couple has been together for around five years. During their relationship, Iris has never been tempted.

The pair does, however, have issues; they once split up and appear to be lured by other people.

The pair in the show gets caught doing something they are not permitted to do. Things are about to become murky.

Gillian and Edgar are a couple.

This couple is hoping their trip to Temptation Island was not a blunder. It’s been three years since they’ve been together. They were also sweethearts in high school.

It’s #TemptationIsland…mistakes WILL be made 😬 Get to know @gillianalexisxx and Edgar when Temptation Island returns March 16 on @USA_Network. pic.twitter.com/tjqg0cptxp

The couple insists that their bond is unshakable. Although the pair decided that nothing more than a kiss is required, things are about to become heated.

Hania & Ash are a couple.

This pair has been together for a shorter amount of time than the other couple. For about a year and a half, they’ve been dating.

They, on the other hand, joke that their marriage has lasted 40,000 years. The two have arrived to discuss their relationship. Everything, however, will go wrong.

✨ I’m feeling the fanta-se ✨ Get to know more about our new couple Ash & Hania on the #TemptationIsland season premiere, March 16 on @USA_Network. pic.twitter.com/mbxaLdfY3K

So, what are your predictions for the forthcoming season? And who do you believe will be the most steadfast? Please tell us in the comments section below.