Legally Blonde 3 Release Date: Will Selma Blair Be in This Movie? 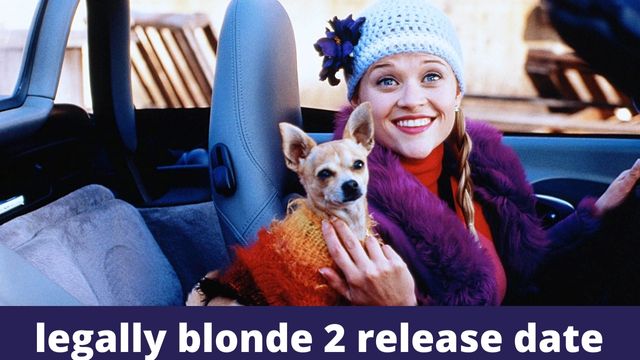 You can’t ignore the fact that the early 2000s were ruled by the Legally Blonde movies and their sequel, Legally Blonde 2: Red, White & Blonde. After the release of the first Legally Blonde film in 2001, audiences immediately fell in love with Reese Witherspoon in the role of Elle Woods.

As a result, the film grossed more than $141 million at box offices around the world, which eventually led to the production of the second film in the series.

It should come as no surprise that fans have been waiting with bated breath for word of a Legally Blonde sequel or a third installment in the series, given the film’s reputation as one of the best and funniest comedies of the 2000s. We may all be thankful that our wishes were granted. After almost 20 years have passed since the release of Legally Blonde 2, plans have been announced to bring the film series back to the big screen with a third installment.

What We Going to See in Legally Blonde 3

The specifics of the plan are still being kept under wraps for the time being. Mindy Kaling, well known for her work on The Office and The Mindy Project, and Dan Goor, co-creator of the show Brooklyn Nine-Nine, will serve as the writers for the third chapter.

Read more:  Stranger Things Season 5 Release Date: How Many Episodes Does Season 5 Have?

Mindy said the following things in an interview with Access Hollywood: “I can’t wait to hear what people think of the new take on Elle Woods at the age of 40 that we’ve written. It has been a lot of fun to speculate on how Elle Woods has changed from when she was 21 to when she is 40.”

The Instagram post that can be found below reveals how excited Reese is to have Mindy on board. The two of them had previously collaborated on the series The Morning Show for Apple TV+ as well as the feature A Wrinkle in Time (2018).

Mindy also revealed that a significant number of fan-favorite moments and Elle’s famed catchphrases would still play a significant role in the movie.

During her conversation with Hollywood Access, she continued by saying, “Bend and snap is eternal.”
Pamela Abdy, an executive at MGM, was asked about what she knew about the upcoming installment in the Legally Blonde franchise during an interview with The Hollywood Reporter in November of 2021.

“It’s not a dream any longer. Reese Witherspoon has signed on to star in the project, and Mindy Kaling and Dan Goor are now writing it. Together with Marc Platt, Reese and Lauren Neustadter are producing the show. We are all working on it jointly to develop it further. What does Elle Woods look like at 40? Elle juggles her role as a mother and a successful job.”

We also know that Reese Witherspoon, who won an Academy Award, is a staunch supporter of giving women positions in which they can be powerful and influential, and that this is a primary focus of her work with her own production company, which is called Hello Sunshine.

She was honored for the good influence she has had on the entertainment business and was featured on the cover of Time magazine in the year 2021.

Who Will Work on Legally Blonde 3

Paulette is portrayed by Jennifer Coolidge, and Elle is played by Reese Witherspoon.

It is not quite apparent who will co-star with Reese at this time. In the 20-year Legally Blonde reunion video, which can be viewed here, the cast members all showed that they still have a lot of affection for the first movie, which we believe signals that they would be willing to feature in Legally Blonde 3 if the screenplay allows it.

Read more: The Owl House Season 3 Release Date: Why Has This Show Been Canceled?

Reese Witherspoon disclosed the news that Jennifer Coolidge will reprise her role as Paulette in a video interview with The Hollywood Reporter. However, at this time there has been no announcement of any definite names.

It is not yet, and because of the delay, we do not believe that there will be one any time in the near future. When we finally get our hands on the trailer, we will make sure that it is included in this guide.

For now, you can watch last season’s trailer

When Will Legally Blonde 3 Come Out?

Initially, it was announced that Legally Blonde 3 would be one of the finalists. must-see movies in 2022 due to the fact that MGM stated the film’s release was anticipated to take place in May of this year.

The release of the movie has been pushed back indefinitely. There is no way for us to predict when Elle Woods will make her comeback.

How Often Has “Legally Blonde 3” Been Pushed Back?

When Witherspoon said in 2018 that there would be a third movie, she said that “Legally Blonde 3” would come out on February 14, 2020. Metro says that the movie was pushed back from September 2019 to May 8, 2020. Well, the release date came and went and nothing happened, but because of the COVID-19 pandemic, movie theatres were closed at the time, so the delay was totally understandable. The company that made “Legally Blonde 3,” MGM, then said in October 2020 that the movie would come out in May 2022.

The closer we got to that date, the less likely it seemed that the movie would come out when it was supposed to because there were no trailers or photos. Then, on March 31, Mindy Kaling, who co-wrote the movie with “Brooklyn Nine-Nine” co-creator Dan Goor, told Time that the movie had been put off indefinitely.

Will Selma Blair Appear in the Third Installment of Legally Blonde?

Who will star in the third installment of Legally Blonde? Reese said that she would like to see Jennifer Coolidge (Paulette Bonafonté), Luke Wilson (Emmett Richmond), and Selma Blair reprise their roles when she was asked who she would like to see brought back from the original cast (Vivian Kensington). In addition, it should go without saying that Reese will reprise her role as Elle.

When Will the Next Episode of Legally Blonde Air?

The release date of “Legally Blonde 3” has been moved to the 20th of May in 2022 after being pushed back. In the third part of the series, sorority girl-turned-lawyer Elle Woods is portrayed once again by Reese Witherspoon, who is known for her iconic performance in the character.

Fans can expect fan-favorite moments and catchphrases to still play a part. Reese Witherspoon has signed on to star in Legally Blonde 3. Mindy Kaling and Dan Goor are writing the screenplay for the TV show. Jennifer Coolidge will reprise her role as Paulette in a video interview with The Hollywood Reporter. The release date of “Legally Blonde 3” has been pushed back indefinitely.

The movie was originally supposed to come out on February 14, 2020. Reese Witherspoon is still set to reprise her role as Elle Woods for the third installment.