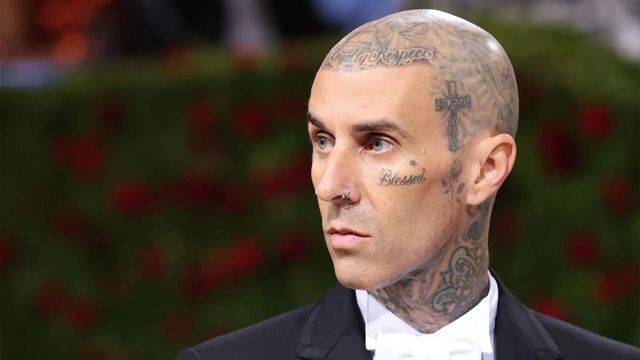 On Friday, September 2, the founder of Poosh displayed via her Instagram account her husband’s tattoo of her lips.

Especially when it comes to homage to Kourt, the drummer for Blink 182 just can’t seem to stop adding to his collection of always expanding body art.

My lips on my husband: speak about marriage goals, Kourt stated in the Stories post.

The Blink-182 drummer’s roughly 100 tattoos on his torso don’t surprise us in the least.

However, this one naturally has special significance given that the attractive pair only were hitched on May 22 in Portofino, Italy, three months ago.

Fans often refer to Travis and Kourt as Kravis. They are extremely open about their PDA for one another on social media, in front of the paparazzi, and on The Kardashians on Hulu.

Several KarJenner family members frequently make disgusted jokes in the first season of their new reality series about how the newlyweds simply can’t keep their hands off one another.

The well-known drummer is renowned with his illustrious tattoo collection, which includes numerous of Kourtney’s designs.

On March 25, 2021, he posted a video to Instagram in which he wrote the words “you’re pretty cool!” in a messy handwriting style.

After some time had passed, it was found out that the tattoo was a quote from the well-known film True Romance, a film that both he and Kourtney like watching.

The year before, for Halloween, Kravis dressed up as the movie’s protagonist and his love interest!

On May 22nd, Kourtney Kardashian and Travis Barker tied the knot in a ceremony that took place in Italy.

In typical lovebird fashion, Travis inscribed the script version of Kourtney’s name onto his breast as well.

Because she also inked him herself, he also has other tattoos that are inspired by Kourtney.

The man’s forearm bears the words “I love you” inked in permanent ink by the woman who is also the mother of three children.

On July 6, the wellness expert branded the letter “K” onto her husband’s arm using a tattoo. Oh, now we’re talking about love!

One week before to their opulent Italian wedding for friends and family, Kourtney and Travis were legally wed on May 15 at a Santa Barbara courthouse.

The well-known couple tried to get married legally before becoming husband and wife at a modest chapel in Las Vegas back in April, but they arrived at the location too late to get a license.

While Travis was previously married to Shanna Moakler, 47, from 2004 to 2008, this is notable as being Kourtney’s first union.

Mason, 12, Penelope, 10, and Reign, 7, are among the famous Kardashian’s three children she shares with her ex-boyfriend Scott Disick, 39.

According to Keeping Up With The Kardashians, Scott and Kourt famously dated from 2007 to 2015.