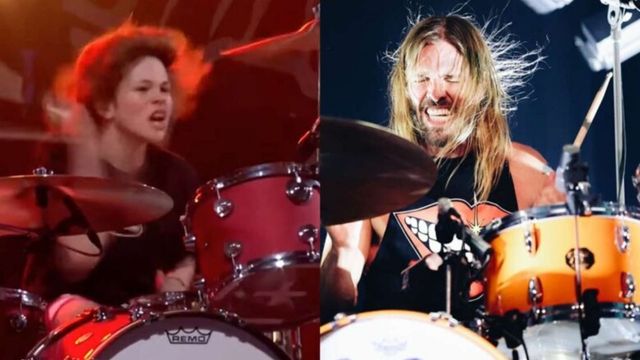 During a night filled with all-star artists paying respect to the late Taylor, a young percussion prodigy of 16 years old took over the drums and played with gusto alongside Dave Grohl. Taylor passed away abruptly and unexpectedly in March at the age of 50.

And Shane wasn’t the only family member in their teens who came to pay their respects and celebrate the life of their departed loved one.

Violet, Dave’s daughter, gave incredibly moving renditions of two Jeff Buckley songs, and she ended up taking the spotlight. Her interpretations of the songs were quite touching to listen to. Dave requested Violet to take the microphone and introduced her by remarking that she was “the only person I know who can honestly sing a Jeff Buckley song.” Violet accepted Dave’s invitation to take the microphone. Following that, Violet wowed the crowd with her renditions of “Last Goodbye” and “Grace,” both of which were written by Jeff.

The band Foo Fighters, together with an extra lineup of A-list talent, will perform live again during the second tribute concert, which is scheduled to take place in September at the Forum in Los Angeles. The funds raised at these two events will be donated to Music Support as well as MusiCares respectively.