Don’t Make Me Go: Is This Film a Sad Story? 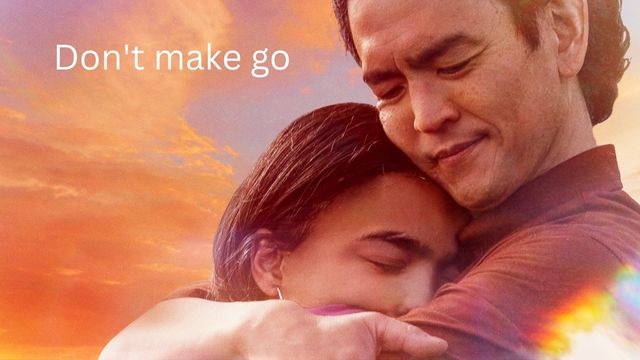 A trip across the country by car is something that a lot of families do. The kinds of road trips that families take together are typically filled with a variety of feelings and experiences.

Some of us who were fortunate enough to have experienced them fondly recall long, hot drives through the middle of nowhere, arguing with siblings over whose arm was on whose armrest, and stopping at dubious roadside establishments for bathroom breaks.

But we also remember the sing-alongs, the time spent bonding as a family, the games played in the car, and the stunning scenery of the American countryside as it passed by the window.

Amazon’s tear-jerking dramedy movie “Don’t Make Me Go,” which was written and directed by Hannah Marks and Vera Herbert, perfectly captures the spirit of going on a road trip. This vacation excursion is going to be a little bit different.

Max, played by John Cho, and Wally Park, Max’s daughter, are embarking on this journey together (Mia Isaac). Max is a father who makes the decision to take his teenage daughter on a road trip across the country, during which he instructs her on how to drive and shares with her valuable life lessons.

They are on their way to see her estranged mother Nicole (Jen Van Epps), who has been estranged from the family for a very long time. She is unaware of this fact. Why? Max just found out that he has a terminal illness and that in order to treat it, he needs to undergo risky surgery.

On Friday, July 15, 2022, Don’t Make Me Go will make its debut for the first time anywhere in the world on Amazon Prime Video.

On June 13, 2022, select moviegoers attending the Tribeca Film Festival were given the opportunity to watch the film a day early.

Max Park has recently learned that he must undergo risky surgery in order to receive treatment for a terminal illness. His response is to try to persuade his daughter Wally to go on a road trip with him, luring her with the appeal of learning to drive as an effort to create a final set of pleasant memories before he tells her what’s going on.

He does this in an effort to create a final set of positive memories before he tells her what’s going on. While she spends the trip wondering when her boyfriend Rusty (Mitchell Hope) will call, the father-daughter duo seems to bond, survive Wally’s driving, and have a memorable trip, despite the secret that is lingering just below the surface. Wally is a terrible driver.

Their destination is Max’s 20th college reunion in New Orleans, which is why they are taking the road trip from their home in California. Based on the trailer, it appears as though he had every intention of flying there, but he had to change his plans after receiving his diagnosis.

Max “secretly hopes to reunite her [Wally] with her mother who left them a long time ago” at the reunion, according to the plot synopsis.

This is likely in the event that something were to happen to him, either as a result of the surgery or the disease. While this isn’t quite hinted at in the trailer, it is mentioned in the plot synopsis.

Wally initially gives the impression that she is not very interested in spending time with her father because she is spending the night outside with her boyfriend and is upset at the prospect of spending “the rest of her summer” on a boring road trip.

Even though the prospect of taking driving lessons tempts her to go, she remains uninterested in the trip as she waits in the hotel for Rusty to call.

An emotional exchange between her and Max results in her being upset and opening up to her father, presumably after she learns the true intentions behind the trip. As time passes, it would appear that she becomes more receptive to the notion of going on the trip, and the exchange in question causes her to be upset.

The trailer opens with Wally and a teen lad in a silo. Max is annoyed and frightened since he hasn’t heard from Wally (Mia Isaac), while she explains that her phone died.

Max has larger difficulties than his daughter dating boys. His regular stress headaches are actually indicators of a brain tumor. He can choose a dangerous surgery to remove it, but the odds are against him.

The trailer’s camera zooms in on the characters’ faces. Many images include warm spotlights on black backdrops, evoking theatrical lights. This adventure and cinematography have scope. During their travel, our characters drive on a two-lane highway.

The view has a classic American pastoral atmosphere as the road twists into the slope and is surrounded by verdant pastures. Another shot of the two besides a Texas boot sculpture hints at the scale of their journey and the terrain they’re crossing. The spectator can see haze and mountains in the backdrop.

Is Don’t Make me Go a Sad Story

Don’t Make Me Go is a family drama now streaming on Amazon Prime about a single father and his 16-year-old daughter on a road trip to New Orleans. Their vacation is sad.

Amazon’s “Don’t Make Me Go” is a tear-jerking dramedy about a father taking his daughter on a road trip across the U.S. The movie will be released on Amazon Prime Video in 2022. “Classroom of the Elite’s” father-daughter duo seems to bond, survive Wally’s driving and have a memorable trip.

Wally is a terrible driver. Max “secretly hopes to reunite her [Wally] with her mother” at the reunion. The trailer’s camera zooms in on the characters’ faces as they drive along a two-lane highway, surrounded by beautiful scenery.