Big Sky Season 3: Is Reba Going To Be On Big Sky? 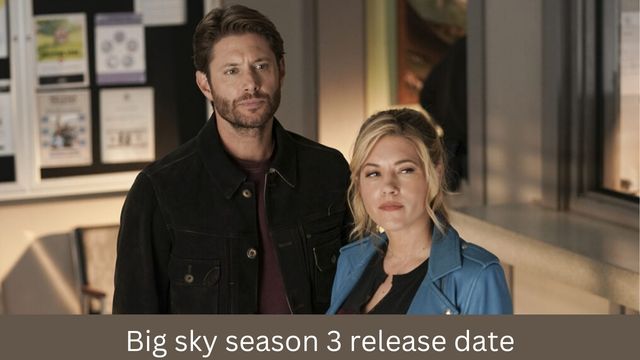 When will the third season of Big Sky be available to watch online? In the upcoming episode of the suspenseful drama television series, Jenny and Cassie will once again take on the role of detective.

The show will premiere on the small screen very soon. As we get ready to re-immerse ourselves in the world of Lewis and Clark County, we have compiled all the information you need to get ready for the upcoming season of Big Sky.

The television series is based on a series of books titled The Highway written by C. J. Box. Due to the fact that Jensen Ackles, who is known for his roles in Supernatural and The Boys, joined the celebration at the tail end of the most recent season, there is still plenty of room for the drama to develop.

If you’ve become obsessed with Big Sky and can’t wait for more episodes, you’ve come to the right place because we’ve compiled all of the information we have regarding the Big Sky season 3 premiere date for you right here.

Big Sky: Deadly Trails will make its debut on September 21, 2022, and it will be broadcast on ABC in the United States. In the United Kingdom, however, it will be available exclusively through the streaming service Disney Plus.

They have been moving quickly on this one, with the show’s renewal for May 2022 being the most recent confirmation of its status. This is consistent with the schedule of the second season, which premiered in September as well after being announced in May 2021.

Kylie Bunbury and Katheryn Winnick will presumably reprise their roles as the private investigator Cassie Dewell and the deputy Jenny Hoyt, respectively. Jamie-Lynn Sigler from “The Sopranos” and J. Anthony Pena from “The Oath,” who plays Tonya and Mo, respectively, are also being considered for series regular roles.

Other new cast members for Season 3 include Henry Ian Cusick as Avery, Luke Mitchell as Sonny’s son Cormac Brick, Anirudh Pisharody (9-1-1), and Madalyn Horcher as New Yorkers Luke and Paige, and Seth Gabel as Walter, the recluse who lives in the wilderness.

After the jaw-dropping conclusion of season 2, we have a lot of questions that need to be answered before season 3 of Big Sky. We have a hunch that the introduction of Jensen Ackles as the new Sheriff in town will take up a significant amount of time and attention.

Following Sheriff Tubb’s shooting, Beau (Ackles) has taken over as his replacement; however, it is currently unknown how long he will continue to serve in that capacity.

Even if Tubb makes a full recovery in season 3, we anticipate Beau will remain a mainstay, and his relationship with Jenny may play a pivotal role in the third season.

During the previous season, we were also made familiar with the Bhullar family, and it is highly likely that they will once again be at the center of the action. In season 2, we saw Jag and Ren take over the family business, but in season 3, the revelation that Travis was an undercover cop the whole time could bring their organization to its knees.

In another part of the story, the relationship between Cassie and Mark might be in trouble. Cassie is now responsible for looking after Phoebe in addition to dealing with the fallout from her decision to kill Ronald and witness Scarlet’s escape. Will things get in the way of Cassie and Mark’s relationship, or will they be able to make it work?

We are also aware that another family has the potential to become a major player in the community, as the Brick family adds even more tension to the dynamic that already exists in Lewis and Clark County. Anyone who crosses them in season 3, especially if they have a reputation for making people vanish, could be in for trouble.

In August of 2022, the official trailer for the third season of Big Sky was made available. Reba McIntrye, a newcomer who plays the role of Sunny, provides the narration for the promotional video.

This is an unexpected turn of events. “In the untamed wilderness, you never know what’s going to be coming around the bend,” she says. “There is no way to predict what’s going to happen.”

The new title for the series, “Big Sky: Deadly Trails,” which is revealed in the trailer as well, suggests that Jenny (Kathryn Winnick) and newcomer Beau (Jensen Ackles), who also features prominently in the trailer, are going to run into some trouble in the upcoming episodes.

Is Reba Going to Be on Big Sky?

This is the promise that Reba McEntire makes regarding her brand-new role in the third season of the ABC thriller Big Sky.

The country music superstar will be appearing as a series regular on the show, and the fact that her character will be the patriarch of a family business that sells outdoor gear might not be good for the investigative duo of Dewell and Hoyt.

Is Montana the Setting for the Movie Big Sky?

According to an article that was published in Deadline, the production moved from Vancouver to New Mexico. Since the two locations are visually comparable enough to one another, the show’s setting of Montana was not altered as a result of the move.

You now have the answer to the question “Where is ‘Big Sky’ filmed?” because the cast and crew will be filming the upcoming third season in the same location.

Where Exactly is the Headquarters of Big Sky Located?

Because the show takes place in Helena, the state capital of Montana, the aerial establishing shots of the city come from that location.

The third season of Big Sky will premiere on September 21, 2022. It will be broadcast on ABC in the U.S. and Disney Plus in the UK. New cast members include Henry Ian Cusick, Madalyn Horcher, and Jamie-Lynn Sigler.

The official trailer for the third season of Big Sky was made available in August of 2022. We have a hunch that the introduction of Jensen Ackles as the new Sheriff will take up a significant amount of time.

Another family has the potential to become a major player in Lewis and Clark County. Reba McEntire will appear as a series regular on the third season of “Big Sky”. The country singer will play the patriarch of a family business that sells outdoor gear. Production moved from Vancouver to New Mexico for the new season, but Montana remained the same.