The Rookie Season 5 Release Date: Have Grace and the Rookie Parted Ways? 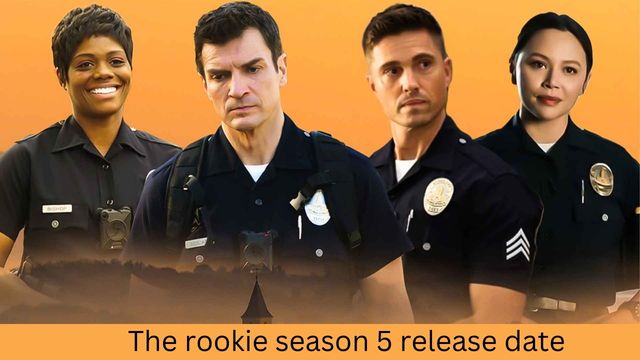 The conclusion of Rookie season 4 raised questions not only about the future of the show’s main character but also about Chenford, the show’s primary romantic pairing. It is time to discuss everything we know about The Rookie season 5, including the storyline, the cast, and anything else related to the upcoming season, as the next season is just around the corner.

In the show “The Rookie,” Nathan Fillion plays the role of John Nolan, a 45-year-old divorcee who runs a construction company and has one grown son. After foiling an attempt to rob a bank, however, his life undergoes a profound transformation. John uproots his life and moves from Pennsylvania to Los Angeles in order to begin his career as a rookie with the LAPD.

John Nolan, who is the oldest rookie in the LAPD and recently moved and became a full-fledged police officer, has been able to keep up with rookies who are 20 years his junior by utilizing his life experience, his determination, and his sense of humor.

Nolan must now come to terms with the decisions he has made in his pursuit of the truth, which presents him with his greatest challenge as a police officer to date. He is getting close to finishing his training at this point.

The fifth season of ABC’s The Rookie will make its debut on September 25 at 10:00 p.m. This maintains the series’ regular time slot on Sunday evening, which the audience has become accustomed to watching.

The following day, it will also be accessible through Hulu’s streaming service. If viewers need to get caught up, Hulu is offering streaming access to all four previous seasons of the show right now. Viewers have a lot to look forward to in the Rookie franchise, which has now expanded to include a new season and a spinoff of the original series.

The fifth season of The Rookie will make its debut on ABC on September 25. This article will be updated with trailers and additional information as soon as it is made available to the public.

The story of Alexi Hawley centered on a man from a nearby town named John Nolan, who was also a student at the University of Pennsylvania Law School. After deciding not to continue his education, he went straight into the construction industry.

After assisting law enforcement in the investigation of a bank robbery, a man in his forties packed up his entire life and moved to Los Angeles in order to pursue his dream of becoming a police officer.

His journey to becoming the oldest Rookie in the LAPD and entering the dangerous and unforeseeable world of crime was quite interesting and fun-loving to watch in the first season of the show.

Taking into consideration that the second season’s final episode left not only Nolan but also the viewers on a cliffhanger, the show is currently in its second season. The veteran officer, who was supposed to be the rookie’s mentor, lied to him and set him up to look like a bad cop.

The betrayal on the part of his friend served as a thorough correction for him. After discovering that his mentor Nick Armstrong had been working with Crime Boss Serj Darien, John Nolan spent the final episodes of season 2 searching for evidence to support his decision to expose this information. Nick, however, stayed one step ahead of the situation and planted evidence against Nolan while he was being apprehended by the police.

During the third season, we saw Nolan make an effort to prove that he was innocent. You also saw how he made amends for his involvement in this muddle. During the third season of The Rookie, John Nolan cleaned up some plaster dust at his home. On the other hand, it is not clear whether or not he will be able to rectify the problems that he has caused throughout his career.

The talented actor Nathan Fillion, who stars in Castle and plays the role of the LAPD’s oldest officer, will once more take the lead role. Although there is no news that can be confirmed about the new cast, it is anticipated that some of the previous cast will also be joining him for this season. These individuals make up the core cast of this series:

A trailer for Season 5 of The Rookie has been made available online. It began with Nolan receiving accolades for the valiant stand he had taken at the conclusion of Season 4.

Read more: X Release Date: Who Exactly Is The Murderer In This Movie?

Because of this, he has the opportunity to accept any position within the LAPD, and Bradford has suggested that he work as an air support officer. It remains to be seen if Nolan will pursue that line of work, but the prospect of him piloting a helicopter certainly seems like it would be entertaining.

In addition to that, the trailer provided a glimpse into the budding romance that is between Bradford and Chen. Last but not least, it dropped hints about the impending return of Rosalind Dyer, the notorious serial killer from Season 2.

Have Grace and the Rookie Parted Ways?

During her most recent appearance on the show, she made what appeared to be her final appearance and voiced her intention to get back together with her former husband. Fans of “The Rookie” might recognize Grace due to her appearance.

This is due to the fact that the character is played by the actress Ali Larter, who has been active in the entertainment industry in Hollywood on a regular basis ever since the late 1990s.

When Does the Rookie Typically Air on Television?

When does the Rookie typically air on television? The Rookie: Feds will be released on Tuesday, September 27, adding a new chapter to the Rookie universe. Watch the series premiere tonight at 10/9c on ABC or stream it on Hulu to see Niecy Nash-Betts shine in the role of Simone Clark.

Is the Sixth Season of the Rookie Going to Be Produced?

The fifth season of The Rookie will make its debut on ABC on September 25. The franchise has expanded to include a new season and spinoff of the original series.

Viewers have a lot to look forward to in the Rookie franchise, which has now expanded to five seasons. The Rookie is currently in its second season. It is anticipated that some of the previous cast will also join him for this season.

There is no news that can be confirmed about the new cast. A trailer for Season 5 of The Rookie has been made available online. Nolan can now apply for any position within the LAPD, and has suggested that he work as a helicopter pilot.

The Rookie: Feds will be released on Tuesday, September 27. The trailer provided a glimpse into the budding romance that is between Bradford and Chen.

Also dropped hints about the impending return of Rosalind Dyer, the notorious serial killer from Season 2. Watch the series premiere tonight at 10/9c on ABC or stream it on Hulu.